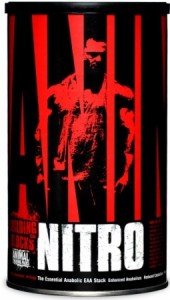 Competitive strength & power athletes.
High-intensity training.
Athletes who are dieting.
Individuals bulking on higher protein diets.
Lifters looking for an anabolic edge.*
When lifting, there is a critical 4-hour anabolic “window of opportunity” that exists. To take advantage of this window, take 1 pack within 30 minutes following resistance training. For even better results, take 2 packs daily – the first immediately before lifting, and the second within 30 minutes after. If you use a post-training protein shake, wait at least another 30-45 minutes after you’ve taken the Animal Nitro pack before drinking your shake. Always take Animal Nitro on an empty stomach, preferably with 8 oz. of grape or other fruit juice.
Like Animal Pak, we think Animal Nitro is a “foundational” supplement. It should be a staple in your nutritional arsenal. Animal Nitro can provide the body with the basic building blocks it needs to grow.* You can stack it with Animal Pak or any other Animal supplement depending on your goals.

Animal Nitro. Old school meets new school. We’ve taken tried and true classics, amino acids, and brought them up to date for the serious lifter who’s looking for something more. Listen, amino acids have been around for decades and have been used by countless athletes. As supplements, they’ve stood the test of time. They’ve also been studied in great depth over the years. And those studies are always moving forward… Recent research suggests that amino acids help support an anabolic environment.* But that research also suggests that timing, dosages, and the mix of aminos are all extremely important. To get things rolling, you gotta start with the right mix, forms and types of aminos to support the maximum anabolic advantage.* Animal Nitro’s got it all.

Animal Nitro has the right types of aminos (essential aminos), forms (“uncoupled”), dose (6 grams per pack), and the right blend of aminos (Human Muscle Protein Complex™). Recent published studies suggest that to stimulate protein synthesis and spark anabolism, only essential amino acids (EAA) are necessary. Non-essential amino acids (NEAA) aren’t (protein powders have both EAA and NEAA). You don’t need a lot either. EAA are so efficient, researchers have surmised that only 6 grams, orally-delivered, are necessary (this is the precise amount in each pack of Animal Nitro).* However, it’s not just a matter of throwing in 6 grams of EAA. For example, you can’t put them into tablets. Tablets, with all the fillers and coatings, prevent the EAA from being utilized by the body efficiently. That’s why Animal Nitro comes only in quick-dissolving capsules. The ratio of EAA are important too. We’ll talk about this in a second…

We covered the types of aminos that are important. But the forms are important too. That’s why we use only “uncoupled” essential amino acids. Uncoupled aminos are a special form of amino acid–they are free of chemical bonds. Because of this, uncoupled aminos are rapidly absorbed by the body—far more rapidly and efficiently than protein powders like whey.* Uncoupled aminos, unlike intact proteins (such as from foods or protein powders) can exert powerful support for physiological actions such as hormone regulation (insulin, growth hormone), immunomodulation, and anabolism.* Just as importantly, uncoupled aminos can bypass the liver. The liver acts as a kind of gatekeeper. When you eat chicken or drink a protein shake, the liver deaminates much of the aminos, and those aminos are ultimately converted to urea.* Not good.

Uncoupled amino acids, on the other hand, have the ability actually bypass the liver. Once ingested, uncoupled aminos in Animal Nitro can form a “bolus” or a special protective mass of aminos. Due to this protective bolus, when the uncoupled aminos reach the liver, they can escape the liver’s processing and enter into systemic circulation quickly and reach their target areas to exert their physiological support.* And this is one of the reasons why Animal Nitro is superior to regular protein powders.* Animal Nitro contains valuable essential aminos acids in “uncoupled” forms that can rapidly reach target tissues and exert anabolic effects.

While the form and types of aminos are important, so too is the blend. You need the right ratios of EAA to extract the maximum benefits. Animal Nitro has the right ratios. Animal Nitro is the only amino acid supplement that contains Human Muscle Protein Complex™. We used the amino acid profile found in actual human muscle protein itself when we created Animal Nitro. Why? By matching the types and ratios of amino acids to human muscle, you can potentially increase the availability of each individual essential amino acid in proportion to its requirement for enhancing muscle protein synthesis.* In other words, if your muscles are a hand, then Animal Nitro’s Human Muscle Protein Complex™ is the glove.

We think Animal Nitro is going to be a solid addition to your nutritional arsenal. As a solid amino-based supplement, it can appeal to a broad range of strength athletes, including powerlifters, bodybuilders, and anyone who requires strength and power as a foundation. It can be used during a cutting or bulking cycle. It can be used by lifters who are looking to promote recovery, more energy, and greater strength.* Because it consists of such fundamental, basic ingredients, amino acids, and because it offers so much nutritional flexibility, we think Animal Nitro will quickly become a staple supplement for lifters everywhere. 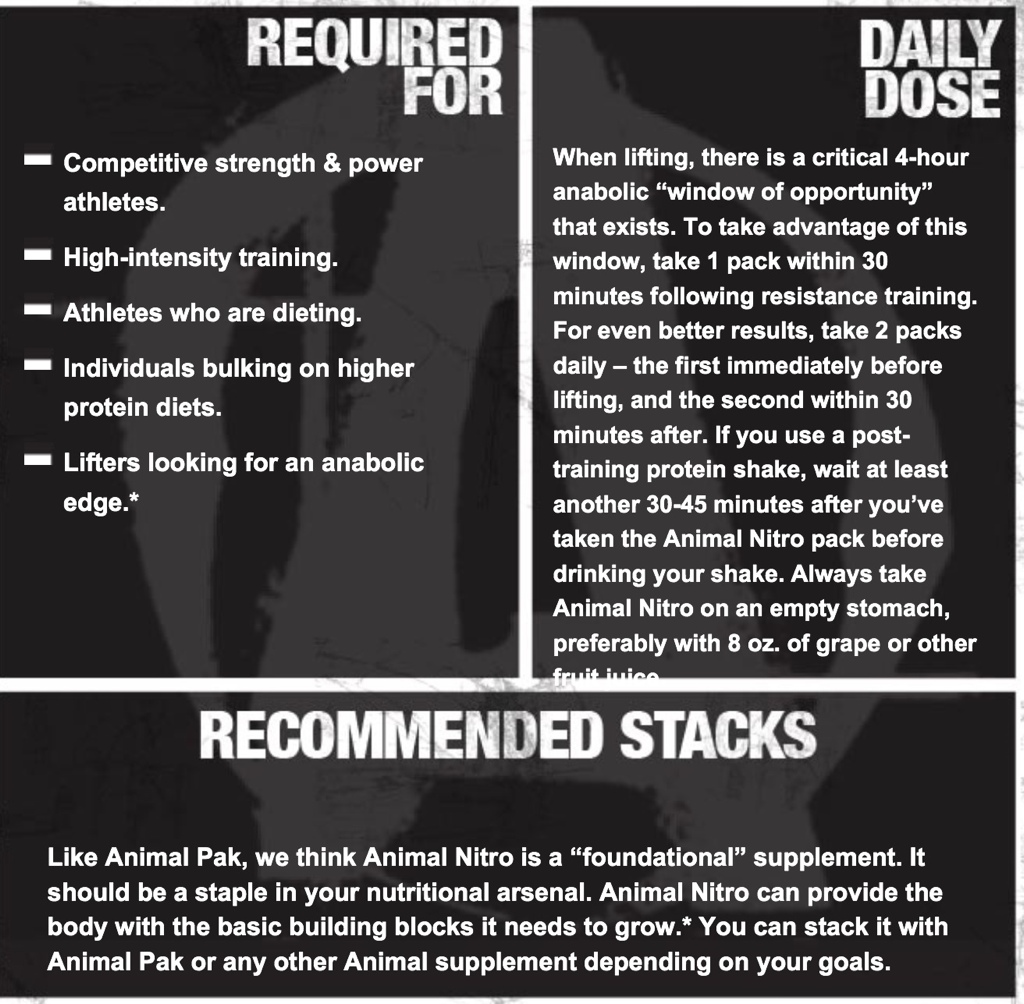 There are no reviews yet, would you like to submit yours?

Be the first to review “Animal - Nitro 30 Packs” Cancel reply